Community education and adult education must be destigmatised as an alternative option to the traditional Leaving Certificate route. That’s according to adult learning advocates at the Annual General Meeting yesterday of AONTAS, the National Adult Learning Organisation, which took place at the Ashling Hotel in Dublin.

On the same day (25.05.22) as the launch of public consultation for a new unified tertiary education sector by Minister Simon Harris TD, new recommendations were made for improvements to the Further Education and Training sector, including greater visibility and mainstreaming of learning options through Quality and Qualifications Ireland as an alternative to the Leaving Certificate.

These recommendations were made by adult learning advocates at the AONTAS AGM, which was attended by Secretary General Jim Breslin from the Department of Further and Higher Education, Research, Innovation and Science, as well as other leading members of the lifelong learning community from across the island of Ireland.

This happened as Minister Harris announced the policy on Twitter, stating that “the points a person gets in their Leaving Cert should not define them or their next steps in life”.

This will be welcome news to adult learning advocates, including Craig Kelly, President of the Cope Foundation’s “Ability Board”, who made a strong recommendation that if application forms for education programmes and funding grants are to be inclusive of people with intellectual disabilities, they need to be in an Easy to Read format, with “short, simple sentences with pictures that just have the most important messages.” He also recommended the need for “more supports in colleges for people with different abilities. If we get the right support, we will get a job and then we won’t have to rely on Disability Allowance. It makes sense in the long run.”

“There needs to be more recognition in prior learning for immigrants,” according to Anna Jakobek, Vice Chairperson for the Learner Voices Group for Cork ETB and member of the AONTAS Board. In her speech, Anna said that “there are currently Ukrainian refugees coming to Ireland with good qualifications, and they deserve to have their hard work recognised like so many more immigrants.”

“We need an event like Higher Options, specifically for Adult Learners to allow them a better opportunity to access information and guidance from the source,” according to Adult Learner advocate Kayla Dibble. She also recommended that there be “Learner representative structures in place like ETB Learner Unions and a National Union.” 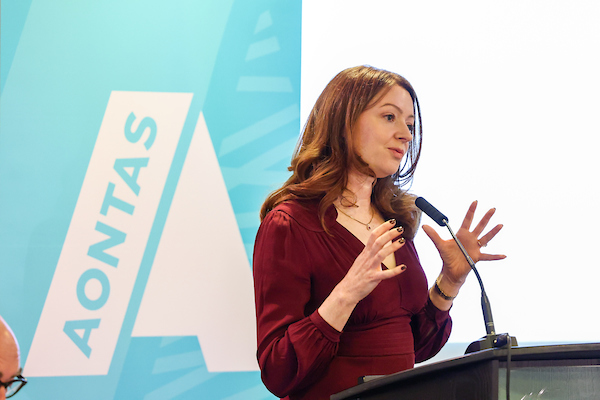 Secretary General Jim Breslin responded directly to these recommendations in his speech at the event, stating that “there’s no one right goal for education and training and there are many pathways to achieving those goals”. He thanked the Adult Learner advocates on behalf of himself and the Department, and spoke of the Department's commitment to further enhancing the visibility of FET, providing an array of options for school leavers and adult learners, not all of which are based on the Leaving Certificate.

The AONTAS AGM was a hybrid event, attended by over 70 people. It was one of Dr Niamh O’Reilly’s final public appearance as AONTAS CEO, before her move to Maynooth University after 17 years with the organisation. Speaking at the event, Dr O’Reilly said: “Every learner’s potential is exponential. We need to empower learners to thrive, by responding to their needs we can create an education system accessible to all.”