Snapshot of the OECD Programme for International Student Assessment (PISA) 2018

In this Snapshot, Sam O'Brien-Olinger, AONTAS Information and Policy Officer gives the main issues from the report related to adult education.

The Organisation for Economic Co-operation and Development (OECD) Programme for International Student Assessment (PISA) published results of its latest survey on 3 December 2019. The PISA survey examines what learners in formal education at age 15 know. Its primary focus is on measuring levels of reading, mathematics and science.  According to their own website

‘It provides the most comprehensive and rigorous international assessment of student learning outcomes to date. Results from PISA indicate the quality and equity of learning outcomes attained around the world’.

Unlike the International Association for the Evaluation of Educational Achievement (IEA)’s Progress in International Reading Literacy Study (PIRLS), which has a curriculum approach, the PISA study has a literacy approach, in which the test content is independent of the participating countries’ school curricula, with a focus upon assessing whether 15-year-olds are able to apply what they have learned in school in real-life situations. Around 600,000 students in 79 countries completed the test in 2018, representing about 32 million 15 year olds. Every three years, the release of the PISA results provide a snapshot of the state of education around the world. For some countries, these results are a wake-up call, challenging policy makers to rethink their strategies and invest more in education.

In short, students who did better in PISA at age 15 tend to do better in early adulthood, according to several indicators, such as the final level of education they attain or the job they find when they left education. 15 year old students who scored in the top quarter in reading were much more likely to complete university than students who scored in the bottom quarter. For example, in Canada, 62% of students in the top quarter of reading performance at age 15 earned a university degree by age 25 – compared to just 9% of students in the bottom quarter (a 53 percentage-point difference). Performance in PISA is thus a good predictor of how students will do in formal education beyond 15. And inequalities effecting student performance within formal education systems inevitably translate into further educational disadvantage into adulthood. For example, the factors that support success at schools, such as socio-economic status, are also likely to affect school-to-work transitions. Generally, students with tertiary-educated parents were between 7 and 20 percentage points more likely to be employed in skilled jobs at age 25 than students without tertiary-educated parents. An intergenerational dimension clearly demonstrates the scale of the need for more equal access to and benefit from participating in education.

Given that today’s 15 year olds are tomorrow’s adult learners, PISA can give a glimpse into the future by providing measures of the extent to which young adults are ‘ready to participate fully in society’. So, what can the performance of 15-years-old students in 2018 tell us about the world in 2030? What do Irish decision-makers need to be cognisant of in order to create a more equitable education system? What should policy-makers understand about educational inequality so that new strategies ensure that learning in all its forms and at every life stage can benefit everyone? How might educational equity achieve a more prosperous future?

Some relevant themes and findings

According to PISA themselves:

Equity in education is a central and long-standing focus of PISA and a major concern of    countries around the world. The United Nations Sustainable Development Goals for 2030 advocate for “ensuring inclusive and equitable quality education and promoting lifelong learning opportunities for all” (United Nations, 2015). Interestingly, ‘equity’ here does not mean that all students have equal outcomes; rather it means that whatever variations there may be in education outcomes, they are not related to students’ background, including socio-economic status, gender or immigrant background. PISA measures equity by whether education outcomes, such as access to schooling, student performance, students’ attitudes and beliefs, and students’ expectations for their future, are related to student’s personal background. The weaker the relationship, the more equitable the school system, as all students can flourish in such a system, regardless of their background. 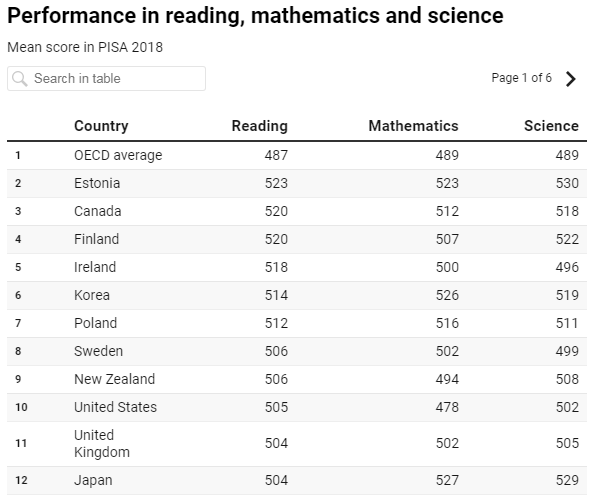 Most relevance to adult and community education

Many students, especially disadvantaged students, hold ‘lower ambitions’ than would be expected given their academic achievement.

Amongst high-performing students in mathematics or science, three in ten boys in Ireland expect to work as an engineer or science professional at the age of 30, while one in six girls expects to do so.

In almost every education system, including Ireland, girls expressed greater fear of failure than boys, and this gender gap was considerably wider amongst top-performing students. This data is important and may be useful for informing future information and advocacy campaigns and/or themes for specific pieces such as ALF and AONTAS work linked to Strategic Goal 3 and Sustainable Development Goal 4. 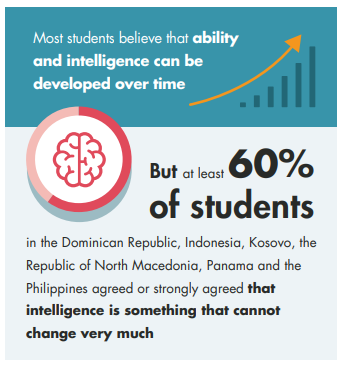 In Ireland 26% of students believed that ability and intelligence cannot be developed over time, this is noteworthy for how this belief might shape perceptions of the value of learning as an adult.

For an interesting critique of PISA in an open letter to The Guardian newspaper see OECD and Pisa tests are damaging education worldwide - academics; to see the PISA study itself and compare to previous years go to https://www.oecd.org/pisa/publications/.; and for the PISA results for Ireland visit https://www.oecd.org/pisa/publications/PISA2018_CN_IRL.pdf. Questions can be directed to: PISA team Directorate for Education and Skills edu.pisa@oecd.org.

New UNESCO report is a ringing endorsement for community education